Far Away From the Sun

03) Blood Shall Be Spilled

04) When Night Surrounds Me

05) Cries From a Restless Soul 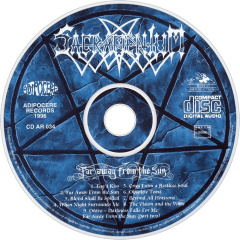 Far Away from the Sun is the debut album of the Swedish black/death metal band Sacramentum. It was released through Adipocere Records in May 1996. The album features cover artwork created by Kristian "Necrolord" Wåhlin. The album's style has been compared to contemporaries such as Dissection and Unanimated, and the album is frequently considered an often-overlooked classic in the genre.

The album was reissued by Century Media Records in 2013. For this reissue, the album was remastered by Dan Swanö in November 2012, with a new CD and booklet layout by Nora Dorkling, rescanned high quality album artwork by Necrolord, as well as an in-depth interview with band by Olivier 'Zoltar' Badin. A music video for "Fog's Kiss" was created to promote the album but was never used until the band provided Century Media with it to promote the reissue.