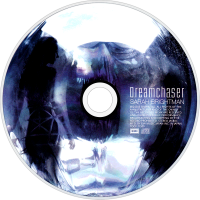 Dreamchaser is the eleventh studio album by English singer and songwriter Sarah Brightman. It was released in Japan on January 16, 2013 and in the United States on April 16, 2013. This album is Brightman's first collaboration with producer Mike Hedges.

The first single "Angel" was released on Sarah Brightman’s official website on 26 September 2012 and it was later released for purchase on 15 October 2012 in Europe and Mexico. The second single, a cover of Elbow band's song "One Day Like This", was released on 19 November 2012.