16) We All Stand Together 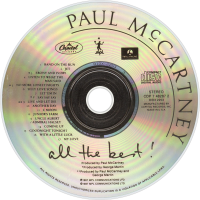 All the Best! is the second official compilation album of Paul McCartney music, after 1978's Wings Greatest, and was released in 1987. The album contains tracks from the beginning of his solo career in 1970 up to (on British and Canadian editions) the newly recorded "Once Upon a Long Ago." The track inclusion and running order varies slightly between UK and US editions of All the Best! to reflect the popularity of particular songs in each country. CD and vinyl versions of the British edition also vary, as the time constraints of a single compact disc versus a double-vinyl album led to the elimination of three cuts on the British CD edition.
Released just as McCartney was beginning work on his next major studio album, All the Best! was a big success, reaching number 2 in the UK (being kept off number one by George Michael's debut solo album Faith) and although it peaked at number 62 in the US, it eventually went double platinum there