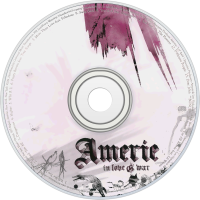 In Love & War is the fourth studio album by American R&B recording artist Amerie, released November 3, 2009 on Def Jam Recordings. Recording sessions for the album took place during 2008 to 2009 at Record Plant Studios in Hollywood, California and at other recording studios in Miami, Florida and Atlanta, Georgia. The album serves as Amerie's first release after leaving Columbia Records and forming her own label, Feenix Rising, which released the album under exclusive license and distribution through the Island Def Jam Music Group.

The album debuted at number 46 on the U.S. Billboard 200 chart, selling 12,500 copies in its first week. Upon its release, In Love & War received generally positive reviews from most music critics.