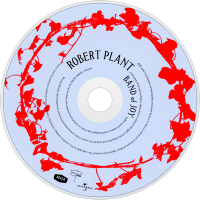 Band of Joy is an album by English rock singer Robert Plant and his band the Band of Joy. It was released on September 13, 2010 in the UK and September 14 in the USA. The album debuted at #5 on the Billboard 200 chart and at #3 on the UK Albums Chart.
The first single released from the album was "Angel Dance".