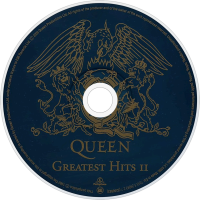 Greatest Hits II is a compilation album by the British rock group Queen, released in 1991. It reached #1 on the UK Album Chart, and is the eighth best-selling album in UK Chart history with sales of 3.7 million copies as of 2009, and has sold 16 million copies worldwide.
The compilation contains most of Queen's European hits from 1981 to 1991. It was released less than a month before the death of vocalist Freddie Mercury and was the last Queen release of any kind while he was still alive. It was later made available in the United States in two box sets: Greatest Hits I & II and The Platinum Collection: Greatest Hits I, II & III. On April 19, 2011, Hollywood Records released the newly-remastered 2011 version of Greatest Hits II in the USA and Japan.
A companion video release entitled Greatest Flix II was released at the same time, but is currently out of print. Most of the videos are now available on the DVD Greatest Video Hits 2 with the exception of the videos from the 1991 Innuendo album.