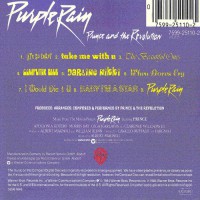 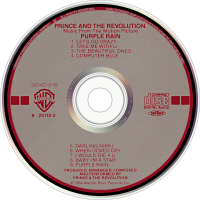 Purple Rain is the sixth studio album by American recording artist Prince and The Revolution and is the soundtrack album to the 1984 film Purple Rain. It was released on June 25, 1984 by Warner Bros. Records.
Purple Rain is regularly ranked among the best albums in music history. Time magazine ranked it the 15th greatest album of all time in 1993, and it placed 18th on VH1's Greatest Rock and Roll Albums of All Time countdown. Rolling Stone magazine ranked it the second-best album of the 1980s and 76th on their list of the 500 Greatest Albums of All Time. Zounds magazine ranked it the 18th greatest album of all time. Furthermore, the album placed 4th in Plásticos y Decibelios' list of The Greatest Albums of All Time. Finally, in 2007, the editors of Vanity Fair labeled it the best soundtrack of all time and Tempo magazine named it the greatest album of the 1980s. In 2012, Slant Magazine listed the album at #2 on its list of "Best Albums of the 1980s" behind only Michael Jackson's Thriller. That same year the album was added to the Library of Congress's National Recording Registry list of sound recordings that "are culturally, historically, or aesthetically important, and/or inform or reflect life in the United States."
The two main songs from Purple Rain, "When Doves Cry" and "Let's Go Crazy", would top the U.S. singles charts and were hits around the world, while the title track would go to number two on the Billboard Hot 100.
The 1000th issue of Entertainment Weekly dated July 4, 2008 listed Purple Rain at number one on their list of the top 100 best albums of the past 25 years. The RIAA lists it as having gone platinum 13 times over. To date, it has sold over 20 million copies worldwide, becoming the sixth best-selling soundtrack album of all time and one of the best-selling albums of all time.

Album Review
Released under the name Prince and the Revolution, Purple Rain is the soundtrack to the movie and has since remained one of the most successful albums in history, selling over 14 million copies in the US and 6 million elsewhere. The album originally peaked at number 7 in the UK, however, climbed to the number 4 spot in the week following Prince’s death in 2016.

Purple Rain held the number one slot in the US album charts for 6 months and won Prince two Grammy’s and an Oscar. It is considered Prince’s masterpiece and has been certified a staggering 13 times Platinum by the RIAA. The song Darling Nikki would trigger the album to be given the first ever Parental Advisory warning, after complaints from the Parents Music Resource Center, a movement founded by Al Gore’s wife Tipper Gore – due to its ‘filthy’ content. In 2008 Purple Rain was ranked number 2 in Entertainment Weekly’s best albums ever; 18th in VH1’s best albums of all time and 2nd by Rolling Stone Magazine on their list of the best albums of the 80s.

In 2015 the album was remastered with state of the art sound to mark its 35 anniversary. Although Prince subsequently withdrew his cooperation from the project, it was released following his death, as Purple Rain Deluxe, on 23 June 2017.