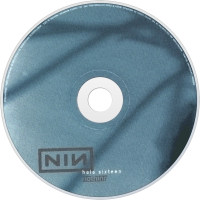 Things Falling Apart is a remix album by Nine Inch Nails released in 2000. Things Falling Apart is the sixteenth official Nine Inch Nails release and is the companion remix disc to The Fragile. The unofficial U.S. promo CD for Into the Void is also labeled as Halo 16. Unlike The Fragile, it is not a double album.
Unlike The Fragile's mixed to positive reception, Things Falling Apart was released to critically panning reviews upon release. Among the album's detractors was NME, who rated it "10/10" as a joke in contrast to the text describing the magazine's dislike of the album. Reviewers have continued to consider Things Falling Apart the worst of the act's catalog, as well as the worst of the Nothing Records catalog. In comparison, The Fragile divided and alienated a portion of NIN's fanbase but had a better reception critically and commercially.
"10 Miles High" is the only song that was a b-side of a Nine Inch Nails single to be included on the album. It was only released on the vinyl version of The Fragile, but appeared as a b-side to "We're in This Together", released in September 1999.