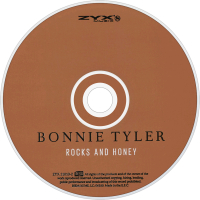 "Rocks and Honey" is the sixteenth studio album by Bonnie Tyler, and is scheduled for release on May 6, 2013. As the next album to be released after "Wings" in 2005, this has been the longest gap between album releases in Tyler's career. Tyler stated that she named the title of the album after referring to the contrast between her and duet partner, Vince Gill, as her voice sounding like rocks and his sounding like honey.
Two songs have been written and produced by Desmond Child. This is the first time Tyler has worked with Child since 1988, on her "Hide Your Heart" album.
In years leading up to the album's release, Tyler has performed new songs such as "You Are The One", "Don't Tell Me It's Over Now", "It's My Name", and "Is That Thing Loaded?". However, none of these songs were added to the album, despite Tyler announcing during various concerts that they had been recorded, or were due to be recorded for it.
The track "Flat on the Floor" is a cover of Carrie Underwood from her 2007 album Carnival Ride and "All I Ever Wanted" was first recorded by Beau Davidson in April 2010.
The track "Believe in Me" will represent the United Kingdom in the Eurovision Song Contest 2013 in Malmo, Sweden.