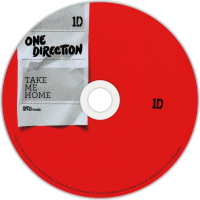 Take Me Home is the second studio album by English-Irish boy band One Direction, released on 9 November 2012, by Sony Music Entertainment. As a follow-up to One Direction's internationally successful debut album Up All Night (2011), Take Me Home was written in groups and has an average of just under five songwriters per track. Largely recorded and composed in Sweden during 2012, Savan Kotecha, Rami Yacoub and Carl Falk, who composed One Direction's hits "What Makes You Beautiful" and "One Thing", spent six months in Stockholm developing songs for the album, and were able to shape melodies around the members' tones.
The album's songs are characterised by metronomic rock-inherited pop, vocal harmonies, hand claps, prominent electric guitar riffs, bright synthesizers, a homogeneous sound and message, the pitch-correcting software Auto-Tune, and rotations of lead vocals. The members' voices are presented individually on the record, and its lyricism speaks of falling in love, unrequited love, the insistence that flaws are what make a person unique, commitment, jealousy, and longing for past significant others. Take Me Home garnered mixed reviews from music critics. Positivism centred on production quality, while criticism hinged on its generic, rushed nature.
Globally, the record topped the charts in more than thirty-five countries, and was the fourth best-selling album of 2012, selling 4.4 million units. The album's number-one debut on the US Billboard 200 chart made One Direction the first group to bow atop the Billboard 200 with their first two albums since Danity Kane entered with Welcome to the Dollhouse in 2008 and their self-titled debut in 2006. The boy band also became the second act in 2012 to achieve two number-one albums within a 12-month period, and the first boy band in US chart history to land two number-one albums in a calendar year. Their debut album and Take Me Home were the third and fifth best-selling albums of 2012 in the United States, respectively, making the band the first act to place two albums in the year-end top five in the Nielsen SoundScan era.
The lead single, "Live While We're Young", released on 28 September 2012, peaked inside the top ten in almost every country it charted and recorded the highest one-week opening sales figure for a song by a non-US artist. Subsequent singles "Little Things" and "Kiss You" were less successful, although the former topped the UK Singles Chart. Staged in support of the record, One Direction performed the album's songs on several television programs. The album's accompanying seven-month concert tour commenced in February 2013.

Album Review
X Factor producers do love a contrived "journey" arc, don’t they? But whatever in-show narrative One Direction could’ve had, it’s post-show where things get interesting.
In less than two years, they’ve gone from the X Factor stage to the pencil cases of the nation to the Guinness World Records. So, amidst their ubiquity, second album Take Me Home almost serves as a reminder that music is their day job.
With Simon Cowell’s beady eye on the lucrative American market, the overall tone marries sun-kissed US skater-pop with British charm. Their now-familiar bouncy, boyish, lad-pop is the starting point of Take Me Home, one foot rooted in what they’re good at while they dip a toe elsewhere: slightly dancier (C’Mon, C’Mon); marginally quirkier (Heart Attack); vaguely rockier (Rock Me, obviously).
But in pursuit of the flavour of the moment/credibility/dollar signs (perhaps all three?), One Direction all but hand their identity over to Ed Sheeran wholesale on his two offerings as songwriter (Little Things and Over Again), his distinctiveness on an entirely separate plane to the rest of Take Me Home. Perhaps surprisingly, the 1D machine would chug along perfectly well without his input.
They know their fanbase, and they’re giving them what they want: every song prescribes a generous dose of the warm ‘n’ fuzzies, each lyric is precision-crafted to tell each fan that it’s intended for them and them alone. Even the song titles – Summer Love, Live While We’re Young, Last First Kiss – read like the names of Sweet Valley High novels.
But it works. Despite Take Me Home’s boardroom-defined objectives, the music itself is of a notable quality. Polished and dependable, despite its safety there are some show-stopping pop anthems present, with the instantaneous chorus of C’Mon C’Mon perhaps the best thing 1D have put their name to.
Whether they could sculpt another record from the same blueprints is unlikely, at least not without leaping feet-first into pure parody. But 1D have a strong platform from which to develop – perhaps the intention, as inevitably the "mature" third album will follow.
For now, Take Me Home takes the One Direction brand, reinforces it nicely, and as far as their fans’ needs are concerned, ticks every single box.