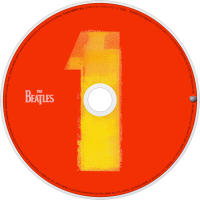 1 is a compilation album by the Beatles, released on 13 November 2000. The album features virtually every number-one single released in the United Kingdom and United States from 1962 to 1970 by the Beatles. Issued on the 30th anniversary of the band's break-up, it was their first compilation available on one compact disc. 1 was a commercial success, and topped the charts worldwide. The world's best-selling album of the 21st century, 1 has sold over 31 million copies.
In addition, 1 is the seventh best-selling album since early 1991, the best-selling album in the US from 2000 to 2009, and the best selling album of the decade worldwide. It is also the fastest selling album in history. 1 was re-released in digitally remastered format in September 2011. Compiled by producer George Martin and the (then) three surviving members of the band, 1 includes the 27 Beatles songs that went to number one in the United Kingdom on the Record Retailer magazine charts and/or the United States on the Billboard magazine charts. It is worth noting, however, that the song "For You Blue" was listed in Billboard chart compilations at No. 1, as a double A-sided single with "The Long and Winding Road", but Capitol Records treated "For You Blue" as strictly a B-side and did not promote it as an A-side. Meanwhile, "Day Tripper" was included on 1, since it charted at No. 1 in the UK as a double A side with "We Can Work It Out", while in the US, only "We Can Work It Out" was No. 1. The only singles released in both the UK and US that did not reach No. 1 in either country, and were therefore ineligible for inclusion on the album, were "Please Please Me" and "Strawberry Fields Forever"—both reached No. 2 in the UK charts. The former was largely known as "The Beatles' first UK number one single"; however, it reached the top spot in the musical magazines New Musical Express and Melody Maker but not on the chart published by Record Retailer (now Music Week). On the other hand, "Strawberry Fields Forever" was part of a double A-side single along with "Penny Lane". Being a double A-side, UK sales policies counted the sales as a half of the real amount sold, a fact that kept the single at No. 2 in the charts, behind Engelbert Humperdinck's debut single "Release Me".
This album is essentially a combination of both the US and UK versions of the earlier album 20 Greatest Hits, with "Something" added to the mix (that song was left off 20 Greatest Hits because of time constraints). On 1, "Hey Jude" was released in its original full-length version (slightly over seven minutes); on the American version of 20 Greatest Hits it had been released as a shortened version.