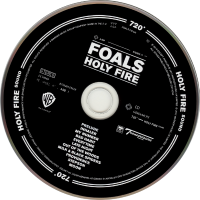 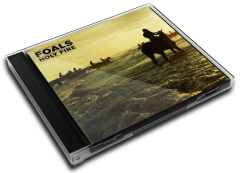 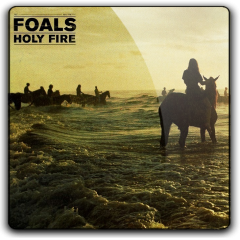 Holy Fire is the third studio album by British band Foals, released on 11 February 2013 in the United Kingdom on Transgressive Records. The first single "Inhaler" first aired on 5 November 2012 on Zane Lowe's BBC Radio 1 show, with the music video being released later that same day. The second single "My Number" first debuted on Later... with Jools Holland on 13 November 2012. The track had its radio debut one month later, also on Zane Lowe's BBC Radio 1 show. The music video premiered on 23 January 2013. The band started demoing in early 2011 in Sydney, Australia with Jono Ma from the Lost Valentinos as the producer. In fact, Ma had already worked with the band in the past in the form of remix work. Keyboardist Edwin Congreave would later admit that the band didn't accomplish much in terms of new songs during the recording sessions in Sydney, however he stated "[i]t wasn't like wasted, it was kind of disappointing. [Jono Ma]'s got his fingers all over the place. He's opened our eyes to a lot of possibilities on the new record, synthesizers and drum machines that we haven't used before. It's given us a foundation to take our new record".
Eventually, the band stockpiled various sound loops and samples, old synthesizers and drum machines for using on the recording of the album.
After a few more demo and recording sessions throughout 2011 and 2012 in Oxford, the band went to record the album with production duo Flood and Alan Moulder at Assault & Battery Studios in Willesden, North West London.
In August 2012, lead singer and guitarist Yannis Philippakis told NME that the new album would be "unashamedly funk", adding that "[t]here are some heavier moments and some dirtier moments. It's swampy, some of the grooves are quite stinky".
The album artwork was designed by Leif Podhajsky, and the original photo is by Thomas Nebbia.

Foals’ moniker made perfect sense in the mid-00s. Their early singles were spindly affairs, capable of kicking out but occasionally awkward of movement. The Oxford five-piece swiftly suffered restrictive pigeonholing: “math-rockers” never had much of a chart-busting ring to it.

So much buzz and hype – enough to drown most bands. But Foals’ debut, 2008’s Antidotes, held firm against any backlash, and 2010’s Total Life Forever successfully expanded their palette of (largely leftfield) influences. A Mercury Prize nomination was just reward.

Today, they’re less a fumbling creature finding its feet and more the tremendous elephant in the live room - truly, they've become a huge-sounding proposition. Foals were already a mainstream presence; now, they’ve made an album properly reflecting that status. Arena tours should await them.

Holy Fire’s lead tracks, Inhaler and My Number, comprise tone-setters for this slickly realised set, which focuses on instant-click compositions over consciousness-creepers. That both sound enormous may have everything to do with Alan Moulder and Flood’s production – and if not, their presence can’t have hurt.

These insights into a more traditional rock aesthetic are ultimately catalogue highs. They showcase the right manner of group maturity, embracing the core of today’s commercial rock market while retaining traces of trademark twitchiness. It’s a perverse progression: two steps backwards to leap into an unwritten future.

Late Night is a slow-burner that brilliantly erupts in its final third. Of similar design is Milk & Black Spiders, which will be a standout moment of the band’s live set when it, too, bursts with intoxicating vibrancy at its climax, strings rushing into the mix. Stepson and Moon are more delicate affairs, sequenced to impress considerably at the album’s end.

Yannis Philippakis’ lyricism could be dizzyingly cryptic before, but here he’s focusing on identifiable themes: love, friendship, distance, travel. Metaphors are less messy, the language streamlined. He sings with tenderness when necessary, and has developed a satisfyingly gruff roar, best employed on Inhaler.

Holy Fire is somewhat hamstrung by Bad Habit, a peculiar hybrid of The Temper Trap’s Sweet Disposition and Mumford & Sons. It lacks the singular spark that makes this band’s best cuts stand boldly from the crowd. Prelude, too, will likely lose the battle against the skip button.

But such quibbles are minor. The kids – which Foals were at their outset – have grown up splendidly. You might say they’ve become a true thoroughbred outfit, if such linguistic horseplay was your thing.