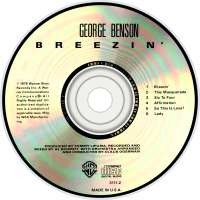 The album marked the beginning of Benson's most successful period commercially. Breezin' topped the Pop, Jazz and R&B album charts in Billboard and spun off two hit singles, the title song (which has become a smooth jazz standard) and "This Masquerade," which was a top ten pop and R&B hit. The album itself was certified triple Platinum by the RIAA.
The album won multiple prizes at the 1977 Grammy Awards. The album won the awards Best Pop Instrumental Performance for Benson and Best Engineered Album, Non-Classical for Al Schmitt and was nominated as Album of the Year for Tommy LiPuma and Benson. "This Masquerade" received the award Record of the Year for LiPuma and Benson, while it was nominated as Song of the Year for Leon Russell and as Best Pop Vocal Performance, Male for Benson.