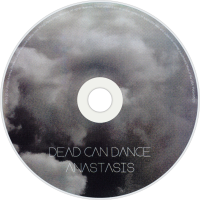 Anastasis is a 2012 studio album by the British-Australian band Dead Can Dance. It is the eighth studio album by the band and the first after Brendan Perry and Lisa Gerrard disbanded in 1998. It was officially released on 13 August 2012 by PIAS Recordings, 16 years after the group's last album, Spiritchaser. It is also the band's first album since it left 4AD Records. "Anastasis" is the Greek word for "resurrection".