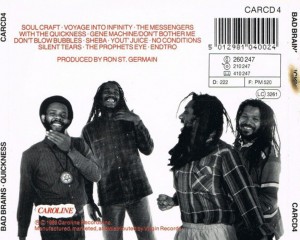 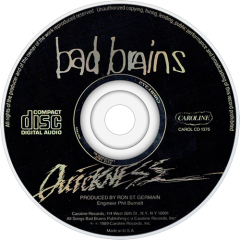 Quickness is the fourth full-length studio album by hardcore punk pioneers Bad Brains. At the time of its release, it was the best selling Bad Brains album and also featured an MTV video for the lead-off track "Soul Craft" directed by Paul Rachman who later went on to produce and direct the feature documentary American Hardcore. Drummer Earl Hudson, though pictured on the cover, is absent, with the drum parts instead being performed by Mackie Jayson of the Cro-Mags. In an interview with MTV, guitarist Dr. Know said that the album's title comes from urgency and swiftness.

The album was a crossover release that contained elements of several genres, including funk, hip hop, heavy metal, punk, and reggae, which made a notable return after being absent from 1986's I Against I. It is also the band's most controversial release, containing lyrics that some claim were homophobic. More specifically, the song "Don't Blow Bubbles" had lyrics that were generally interpreted as being homophobic and suggesting that AIDS was God's cure for homosexuality. When asked about the song, guitarist Dr. Know said that "We wrote that song as kind of an angry warning to homosexuals. We didn't really mean to insult them, but a lot of people we knew seemed to be living with their eyes closed.". In a 2007 interview where bassist Darryl Jenifer called their previous homophobic views "ignorant" he was asked about the song and the furor over the lyrics and replied "They don't understand that we've grown. Just like anyone, I'm not ashamed to say, “Maybe I could have been…” Damn right, I was a homophobe! I shouldn't have to explain that to the world because everyone will do that. That's wisdom. You have to grow to be wise."

The Sacramento internet radio show, Soulcraft, got their name from the first track of this album.