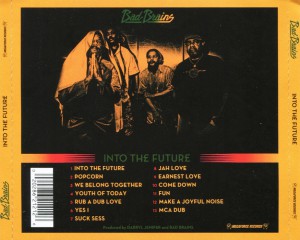 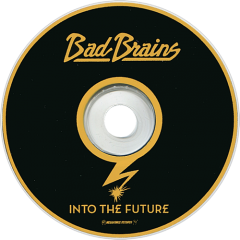 Into the Future is the ninth studio album by the American hardcore punk band Bad Brains, which was released on November 20, 2012 on Megaforce Records. It is a tribute dedication to Adam Yauch of the Beastie Boys, a longtime friend of the band who died of cancer six months before its release, and produced their previous album Build a Nation.

Album Review
Amongst the original US hardcore trailblazers of the 80s underground, no band was more incendiary or more controversial than Bad Brains.
The fiery meld of jazz chops, demonic hyperspeed and devotional intensity they dealt out, along with their equal skill with both blistering punk and beatific reggae, have rightly made them the stuff of reverence and legend.
Yet it's been a rocky road since the last Bad Brains album anyone could reasonably call a classic, 1989's Quickness. And while recent live shows have shown the band to be as finely honed a destructive unit as ever, vocalist and soothsayer H.R. has proven himself to be a dangerous liability, frequently mumbling his way impassively through their back catalogue, unsure of which planet he's meant to be broadcasting from.
True to form, Into the Future, despite boasting all the original members that first kicked hardcore into orbit some 30 years hence, betrays the sound of a unique band cursed by a slightly uneasy relationship with their own past.
Certainly, though, it rockets out of the starting gates in formidable fashion. The frantic cosmic hardcore of the title track and the loose-limbed groove of Popcorn display all the genre-splicing fury of yore; and H.R.'s trademark charismatic whine is illustrative of a man mercifully on the correct wavelength.
Yet while the band's freakish chemistry is in abundance, they occasionally struggle to maintain this fortitude for the album's 37 minutes. The alluringly odd jazz-rock of Fun is a thrilling collision of shapes, but by-numbers reggae jams like the meandering Jah Love and perfunctory breakneck workouts like Suck Sess display an unfortunate tendency to spin their wheels.
Most puzzling of all, a series of spoken-word samples peppering this album, some apparently from vintage interviews, seem to be specifically designed to underline the revolutionary nature of Bad Brains' assault. Yet despite the band's tendency towards rasta-style self-aggrandisement, this display of vainglory sits uneasily next to both the sometimes slightly half-baked nature of this effort and, indeed, its title.
These sky-surfing legends may have another great album in 'em yet, but for all its intermittently irie moments, Into the Future isn't it.