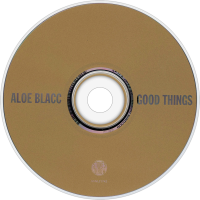 Good Things is the second studio album by American soul singer Aloe Blacc, the album was released on September 28, 2010 in the U.S and 26 November 2010 in the UK by Stones Throw Records.

Album Review
With recession biting both sides of the Atlantic, there are tangible twinges of disquiet at the heart of Western living right now, tapped into with great effect on Californian vocalist Aloe Blacc’s second album.
The anti-superficiality of left-leaning hip hop and the like has long represented a counter stance well trodden as the wealth-flashing rap it opposes. Indeed, a bunch of Aloe Blacc’s label-mates on the ever-inventive Stones Throw have made cult careers mining such rich seams. Good Things is no mere beatnik projecting, however: Blacc was among thousands who saw their day jobs cut short by redundancy when the downturn hit.
A noticeable shift from 2006 debut Shine Through, Good Things mines an indistinct middle ground between hip hop, gospel, soul and RnB over 50 minutes of unrepentantly grown-man music. Money, or lack thereof, is unsurprisingly his chief concern: the bruised croon of self-explanatory opener I Need a Dollar immediately affirms as much. Miss Fortune propels the standpoint a step further, Blacc recalling a youthful choice "between riding in a bus or driving a new Rolls-Royce/ And I decided what I wanted was the bread" with admirable candour.
The uplifting manner in which he sets about detailing hardship is striking. Take Me Back, with its talk of getting "caught with your hand up in the cookie jar", is a slinky number one single from a parallel world, imbued with universally affecting qualities equalling prime Gnarls Barkley. And, much like semi-kindred Detroit spirit Dwele, there are timeless reverberations of Marvin Gaye here, too.
Protest songs polite enough to take home to your mother are where Good Things truly plays an ace card, though. The quiet drama in the refrain of Politician simply yet eloquently encapsulates the heart-sinking detachment from democracy that has troubled many disillusioned voters in turbulent times.
With Bilal and the aforementioned Dwele dropping similarly inspired albums this year already, 2010 is fast becoming a landmark year for thoughtful American soul craft. Good Things is sufficiently accomplished, in fact, to at least temporarily banish the clouds of financial doom and gloom to the horizon.