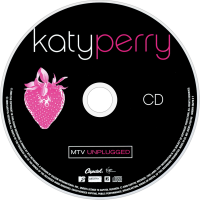 MTV Unplugged is the first live album by American singer-songwriter Katy Perry, and was released by Capitol in the United States on November 17, 2009. The two disc CD/DVD package comprises stripped-down songs performed by Perry for MTV on July 22, 2009, in New York City as part of the MTV Unplugged series. The album features rearranged takes on Perry's hit songs like "I Kissed a Girl", "Waking Up in Vegas", and "Thinking of You," as well as two brand-new songs, Perry's version of Fountains of Wayne's "Hackensack" and an original song, "Brick by Brick." The DVD also features exclusive interview footage. In Brazil, unlike the US, it was released in DVD/CD format instead of CD/DVD format.

In 2009 MTV decided to relaunch its Unplugged music performance series with a series of exclusive monthly performances, including Katy Perry. After releasing her breakthrough album, One of the Boys, Perry felt MTV Unplugged was the perfect medium for her to show off who she really is as an artist and share the stories behind her songs with an audience.

Perry's performance was recorded by Kevin Hartmann at NEP Midtown Studios, New York City, NY, on July 22, 2009. The audience consisted of fans who were selected by a competition for the show. Contestants had to send an email telling why they are big fans of Perry. Perry performed seven songs, including a remixed cabaret version of I Kissed a Girl Perry had to do certain retakes just in case the second take was better. The intro also had to be redone again in the end because apparently it didn't tape the first time. There was a lot of banter in between takes. Perry started singing Michael Jackson, Total Eclipse], and Tenderoni through assorted points of the time. One of the performed songs, Ur So Gay, was dedicated to one of her friends in the audience, Markus Molinari, who responded by shouting out, "I'M NOT GAY!" Perry kept joking Molinari was wearing the remainder of her hair extensions and how much Mia Moretti (also in the audience) eats. She was wearing a purple and white flowy gown she referred to as her fairy dress. After six songs she asked the audience whether she should perform "I Think I'm Ready" or "Brick by Brick" as the closing number, although she hesitated to perform "Brick by Brick" because her management might not approve the song.