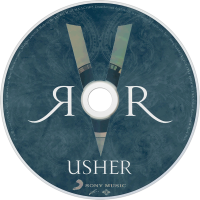 Raymond v. Raymond is the sixth studio album by American R&B recording artist Usher, released on March 26, 2010, by LaFace Records. Production for the album took place during 2008 to 2010 and was handled by several producers, including Jermaine Dupri, The Runners, Ester Dean, Polow da Don, RedOne, Jim Jonsin, Danja, Jimmy Jam & Terry Lewis, Bangladesh, and Tricky Stewart.
The album debuted at number one on the US Billboard 200 chart, selling 329,000 copies in its first week. It sold over one million copies in the United States and was certified platinum by the Recording Industry Association of America (RIAA). The album also produced five singles that achieved chart success, including US hits "Hey Daddy (Daddy's Home)", "Lil Freak", "There Goes My Baby", and international hits "OMG" and "More".
Upon its release, Raymond v. Raymond received generally mixed reviews from music critics, who were ambivalent towards its songwriting and themes. Nonetheless, the album earned Usher several awards, including Grammy Awards for Best Contemporary R&B Album and Best Male R&B Vocal Performance. Usher promoted the album with a supporting international tour, OMG Tour, in 2011.

Album Review
Judging from the title, this should be a similar affair to Marvin Gaye’s Here, My Dear, an album which soundtracks the messy end to a high-profile marriage, with Usher lobbing bitter-bombs at his ex, Tameka Foster.
But Usher is also every inch the modern businessman, and his business largely concerns singing about making love with girls, which he does here, a lot: divorce or no divorce.
In fact, Foolin’ Around, Guilty and Papers are the only songs to directly address the situation, and even then they’re done with a story-teller’s eye. The former is an impassioned apology from an unfaithful (and famous) husband to his long-suffering wife, the latter a slightly different tale in which the husband has tried as hard as he can, but admits the marriage is doomed. Guilty is a song to the judge at the divorce hearing. It probably wouldn’t work as legal defence.
We’re on far more familiar slow jam territory with There Goes My Baby, a sumptuous deep-pile carpet of seductive song, and Hey Daddy (Daddy’s Home), which impressively manages to rhyme “flexing” with “sexing”. Mars vs Venus even embarks on an extended metaphor in which Usher’s bedroom is its own solar system, complete with a perfect seaside postcard reference to the Big Bang.
Lil’ Freak goes a smidge darker, Ush leering at a hot girl in a club about the sheer magnitude of his pulling power, over a sped-up Stevie Wonder sample (Livin’ for the City, since you ask). It’s pitched somewhere between thrillingly seedy and downright creepy, depending on your stomach for singers boasting about having a “ménage-ay” with a gaggle of girls.
So don’t come to this thinking you’ll get the inside scoop on a celebrity divorce, but as a soundtrack to rampancy in general, it’s hard to beat.