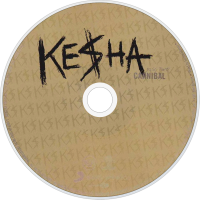 Originally planned to only be a re-release of Animal, Cannibal was instead released both as a deluxe edition of Animal as well as a stand alone EP. The EP has been classified as a follow up "nine-song companion" record to Animal. Cannibal was originally intended to contain anywhere between four to eight tracks with the final outcome consisting of eight tracks and one previously heard song remixed, for a total of nine tracks.