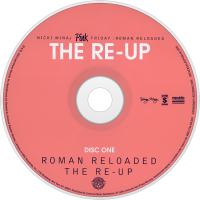 Pink Friday: Roman Reloaded is the second studio album by Trinidadian-American recording artist Nicki Minaj, released on April 2, 2012, by Young Money, Cash Money, and Universal Republic Records. Looking to transition from 2010 debut album Pink Friday, Minaj wanted to make a follow-up record about "just having fun". Stylistically, the album is divided by a first half of hip hop tracks and a second half of dance-pop songs. As executive producer, Minaj enlisted a variety of collaborators, including Hit-Boy, Dr. Luke, Ester Dean, and RedOne.
Upon its release, Pink Friday: Roman Reloaded received generally mixed reviews from music critics, who complimented its hip hop material but felt the dance songs were generic. The album debuted atop the US Billboard 200 with 253,000 copies in first-week sales, becoming her second number one album on the chart. It was later certified platinum for shipments of one million copies by the Recording Industry Association of America (RIAA). Internationally, the album peaked at number one in Canada, Scotland, and the United Kingdom and within the top five in Australia and New Zealand.
Pink Friday: Roman Reloaded was promoted with four singles, including the international hits "Starships" and "Pound the Alarm", and a radio single, "Va Va Voom". Minaj supported the album with the Pink Friday Tour and the Pink Friday: Reloaded Tour. On November 19, 2012, the album was reissued as an expanded version subtitled The Re-Up.