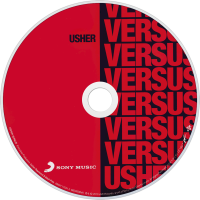 Versus is the first extended play by American R&B recording artist Usher. It was released on July 20, 2010 on LaFace Records and Jive Records in conjunction with the deluxe edition of his sixth studio album Raymond v. Raymond. Several producers contributed to the production of the EP, including Polow da Don, Jim Jonsin, Rico Love, Drumma Boy, Jimmy Jam and Terry Lewis, and Max Martin. Versus is marked as "the last chapter of Raymond v. Raymond", and follows the theme of [Usher] exploring around the subjects of being newly single and a father.

Preceding the EP's release was the lead single "DJ Got Us Fallin' in Love", which achieved international success. The song peaked at number four on the U.S. Billboard Hot 100, and peaked inside the top-ten in several other countries singles charts. "Hot Tottie" and "Lay You Down" were released as the second and third singles, respectively, with the former becoming a US top-thirty hit. To promote the album, Usher appeared in several award and television shows, including Good Morning America, The Ellen DeGeneres Show and Jimmy Kimmel Live!.

Versus debuted at number four on the US Billboard 200 chart, selling 46,000 copies in its first week. It became Usher's sixth top-ten album in the United States, and has since, sold 302,000 copies in that country. Despite some criticism towards its pop-oriented material, the EP received generally positive reviews from most music critics. It earned Usher several nominations, including a Billboard Music Award, a International Dance Music Award and a NRJ Music Award.