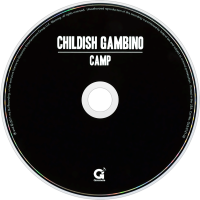 Camp is the debut studio album by American rapper Childish Gambino; it was released on November 15, 2011, by Glassnote Records. After releasing four mixtapes and three albums independently, he signed to Glassnote and recorded Camp, marking it as his first album on a major record label. Camp was co-produced in its entirety by long-time collaborator Ludwig Göransson.