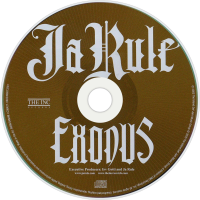 Exodus is a 2005 greatest hits compilation album by rapper Ja Rule. He had released an album every year since 1999, but in 2005, with no new album planned The Inc. released this greatest hits album featuring songs such as "Mesmerize" and "Wonderful".
Irv Gotti was forced to release one more album from Ja and Ashanti to honor the contract with his parent company. Universal Records did not want to support a full album by either artist so two greatest hits sets were released. The version of It's Murda on this album is shortened and not the original.
The album was also made in an edited version, which has some lacks of censorship in songs due to different times the songs were edited at.
The album debuted on the Billboard 200 at number 107 and peaked at number 50 on the UK albums chart.