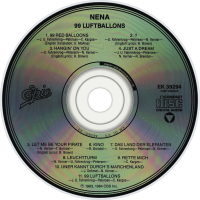 The well-known title track is included here twice (in English and German versions), and the rest of the album, also split down the middle between English and German lyrics, is rounded out by lightweight new wave pop confections like "?" and "Hangin' on You." Although the record's dated production is clearly a souvenir of the early '80s, Nena's bouncy synth pop is likable just the same.