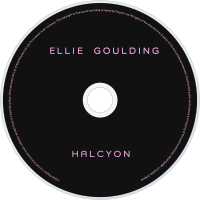 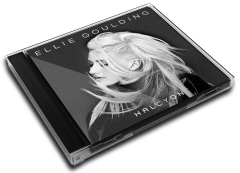 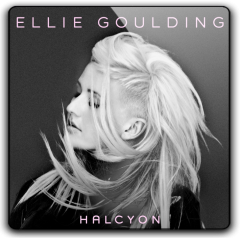 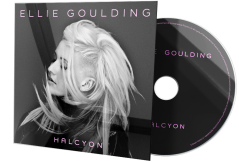 Halcyon is the second studio album by English recording artist Ellie Goulding, released on 5 October 2012 by Polydor Records. It was recorded between 2011 and 2012, during promotion of her her debut album Lights (2010). The album sees Goulding working with several producers, including Jim Eliot, Starsmith, Billboard, Justin Parker, MONSTA, Madeon and Mike Spencer, as well as collaborations with artists such as Tinie Tempah and Calvin Harris.

Halcyon received generally positive reviews from music critics, who complimented Goulding's more aggressive showcase of her voice, with some critics calling it "luxuriously epic" and commending Goulding as "poised at the edge of artistic and career possibilities". However, less favourable reviews felt that "the main flaw of Halcyon is that it occasionally feels a bit too much" and that the album concedes to "factory-standard chart dance". The album debuted at number two on the UK Albums Chart, selling 33,425 copies in its first week. It also debuted at number nine on the United States' Billboard 200 with first-week sales of 34,000 copies, while reaching the top five in New Zealand, the top ten in Canada and Ireland, and the top twenty in Australia.

On 26 August 2013, the album was reissued as an expanded version titled Halcyon Days. The lead single from the reissued album, "Burn", was released 5 July 2013. The song topped the UK Singles Chart, becoming Goulding's first number-one single on the chart. It also charted in the top five in Ireland and in the top ten in Australia, Germany and New Zealand.

Album Review
Ellie Goulding's been a shape-shifter long before she started experimenting with radical coiffures to match the style of her dubstep beau, Skrillex. Since bagging the BRIT Awards’ Critics Choice in 2010, she's flummoxed the lot of us by refusing to stick in one spot. Witness the transition from the sparkly pop of her debut album, 2010's Lights, to that soppy, saccharine cover of Elton John's Your Song.

It's little wonder, then, that Halcyon finds her in metamorphosis again. Gone is the perky hybrid of electro-folk pop that illuminated Lights, as opener Don't Say a Word lays out a fine manifesto for change. It sees Ellie throwing herself at a would-be-lover's feet, riding a crest of choral chanting and gloomy soundscapes before the whole thing explodes in a burst of shooting stars.

While there are ample bangers – Anything Can Happen boasts spurting synths and a sky-kissing chorus – there's electro-ballad finery, too. Joy is a string-laden affair that showcases her helium-powered pipes, while I Know You Care sees her try to convince someone – us, her lover, herself – that they have something worth salvaging: "I know it wasn't always wrong / But I've never known a winter so cold."

What scuppers Halcyon, though, is the sense that Ellie's still not nailed down her own identity. There's just too much bombast, and the magpie-like-production and big, booming arrangements swaddle rather than swathe her vocals. Far from showing off her talents, the likes of Figure 8 and Atlantis become bottomless pits filled with heavy-handed knob-twiddling.

Most frustrating of all, perhaps, is the "bonus track" collaboration with Calvin Harris, I Need Your Love. It's a tantalising glimpse of what she could be capable of when her voice isn't submerged – and, ironically for a track she can only claim half-ownership of, it's got a swagger and bounce that feels resolutely more "her" than when she's playing gloomy dress-up.

As a second coming, Halcyon shows Goulding’s not wanting in ambition, or incapable of conjuring up the odd bit of magic. But next time, she needs to make sure she's a bit choosier about what exactly she pours into the cauldron.