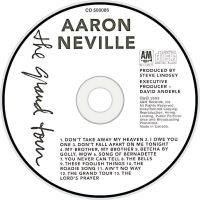 In 1993, Neville released The Grand Tour on A&M Records. The Grand Tour was a No.1 song for country music legend George Jones in 1974 and while Neville's version only peaked at No.38 on the Billboard country singles chart, it was highly acclaimed by fans and critics, resulting in a nomination for the Grammy Award for Best Male Country Vocal Performance at the 36th Annual Grammy Awards in 1994