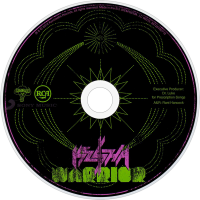 Warrior is the second studio album by American recording artist Kesha. It was released on November 30, 2012 through Sony Music in Australia and New Zealand; for the United States the album was released on December 4, 2012 through RCA Records. Recorded between January and August 2012, writing for the album began in late 2011 and ended in early 2012, with Kesha writing the majority of the album while touring the world and during her spiritual journey. Produced by longtime collaborators Dr. Luke, Max Martin, Shellback, Ammo and Benny Blanco, the album also features guest vocals from American rock singer Iggy Pop, who has been cited as a major influence on the album, as well as contributions from Nate Ruess from American indie rock trio Fun, American rapper will.i.am, The Black Keys drummer Patrick Carney, American rock band The Strokes, American rock band The Flaming Lips and Kesha's own mother, Pebe Sebert. Musically, Kesha has said that Warrior is her attempt at reviving the rock 'n' roll genre, calling it a "cock pop" record, as well as saying that it is more personal than her previous material. While the album incorporates electronic rock and pop rock genres, it is primarily influenced by dance-pop and electropop, which has been frequently used on her previous material. Lyrically, the album's theme is said to be "magic" and inspired by Kesha's experiences while on tour. It discusses subjects such as self-empowerment, love and sex.

Warrior received generally positive reviews, who commended its rock influenced material, lyrical content, and collaborations whilst others criticized its use of Auto Tune and formulaic content. The album reached number six on the Billboard 200 in the United States, while also charting within the United Kingdom, Australia, Belgian, Ireland, New Zealand and Spain. The album's lead single, "Die Young", has since become a commercial success internationally, reaching number 2 on the Billboard Hot 100 in the United States and charting in multiple countries such as the United Kingdom, Australia, Brazil, Canada, New Zealand, Norway and Scotland. "C'mon" initially served as a promotional single, but it is scheduled to be released as the album's second single on January 7, 2013. An acoustic EP Deconstructed was exclusively released through her website in order to promote the fan edition of the album, and features re-record tracks from her previous releases and a cover of "Old Flames Can't Hold a Candle to You" by American country recording artist Dolly Parton, which was co-written by Kesha's mother, Pebe Sebert.

Album Review
Back in 2009, when she released her debut single TiK ToK, Ke$ha presented herself as wilfully trashy. Here was a pop singer who'd inserted a dollar sign into her stage name and sang about brushing her teeth with a bottle of whiskey.

However, her debut album Animal turned out to be against-the-odds enjoyable. It matched hooks with humour, and made the most of pop's new obsession with heavily Auto-Tuned vocals. Ke$ha may have been silly, but she wasn't stupid.

Even so, it's perhaps surprising that she's showing signs of artistic growth. Like her debut, Warrior is a collection of shamelessly commercial electro-pop, but on several songs, Ke$ha works in her love of 1970s rock. Lead single Die Young begins with the sound of an acoustic guitar, while Thinking of You mixes punky riffs with her usual synths. She even drafts in Iggy Pop for a ridiculous duet called Dirty Love.

It's one of several welcome surprises on the album. Love Into the Light is a smoky 1980s-style slowie with drum sounds perfect for the Cadbury's gorilla. Only Wanna Dance With You sounds like Ke$ha covering a Strokes single, and even features two members of the New York indie band – for a supposedly low-rent pop singer, Ke$ha has a lot of trendy mates. Meanwhile, Wonderland is a country-tinged ballad which proves she can sing without Auto-Tune.

Perhaps inevitably, several tracks feature the dreaded dubstep breakdown, surely 2012's most overused trend. And more troublingly, one or two songs sound very similar to recent hits by Katy Perry, with whom Ke$ha shares a producer (Dr Luke). But taken as a whole, this is another surprisingly enjoyable album from a pop singer who has managed to broaden her approach without losing her USP.

In fact, Ke$ha's trademark trashiness is still disturbingly infectious. It's hard not to smile when she sings about getting it on with a ghost, or rhymes "sabre-toothed tiger" with "warm Budweiser". However, even Iggy Pop has no answer to Ke$ha's strangest come-on from their flirty duet: "Champagne tastes like p*** to me."