…and Justice for All 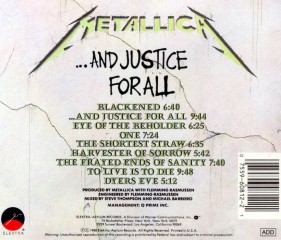 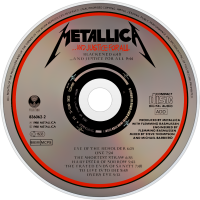 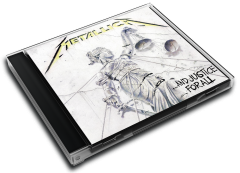 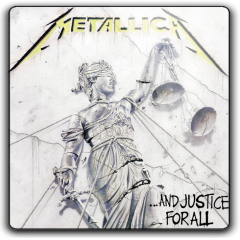 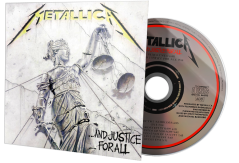 ...And Justice for All is the fourth studio album by the American heavy metal band Metallica. The album was released on August 25, 1988 through Elektra Records. It was the group's first full studio album to feature bassist Jason Newsted, following the death of Cliff Burton in 1986. Newsted had previously appeared on the Metallica E.P. The $5.98 E.P.: Garage Days Re-Revisited, which was his first recorded work with Metallica. ...And Justice for All was certified 8x platinum by the RIAA on June 9, 2003.
The front cover depicts the statue of Lady Justice cracked, bound by ropes, her breasts exposed, and both of her scales filled with dollars. The words "â€¦And Justice for All" are written in graffiti-like lettering to the right. The cover art was created by Stephen Gorman, based on a concept developed by James Hetfield and Lars Ulrich. ...And Justice for All was Metallica's final collaboration with longtime producer Flemming Rasmussen. The album was initially released on one vinyl disc, but soon after re-released (without additional tracks) as a double-album.

User Album Review
And Justice For All was released in 1988, after what was an extremely difficult time in the personal lives of the members of Metallica. While touring their previous release, Master Of Puppets, their tour bus was involved in an accident that killed their bass player Cliff Burton.

This album sounds different to every other Metallica record, vocally gruffer but with thinner orchestration. Drums tick and pop, rather than bang, the guitars sound dryer and thinner, and there’s little in the way of bass. The guitars even occasionally resemble electric violins or cellos - particularly on the closing track "Dyers Eve".

The songs are longer too. And as the sound has become thinner and tauter the songs have grown grander and more epic. These are musicians becoming more ambitious craftsmen and experimenting as a result.Part of this experimentation sees the group explore their progressive streak, but thankfully the speed with which they dispense time changes, new ideas and new phrases that prevent this going on for too long.

As a record it's complicated, aggressive and hugely technically ambitious (so much so that the majority of these songs have only rarely been reproduced in their entirety live), and contains snatches of some of Metallica's finest work – “Blackened” and “Frayed Ends Of Sanity” stand out in particular, both full of ideas, crackling with aggression and neck-snapping hooks.

However, it’s a shame that the rigor applied to recording ideas wasn’t applied to making the album sound better, the thin production gives the whole record a monochrome, slightly one-dimensional feel.
It's as if such was their confidence as a group that they were determined to pursue and express every idea as it occurred in every song, and there are lots of them so they get bigger and grander, but sometimes needlessly so, this lack of economy can leave you feeling like a spectator.

As a result this is a less inclusive, more introverted and frankly quite gloomy record. Although it’s mightily impressive, perhaps in hindsight this is one effort best left to the completists.