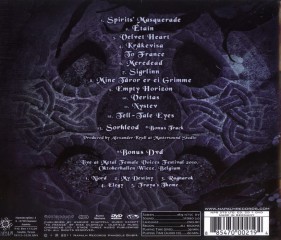 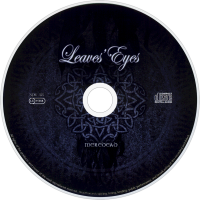 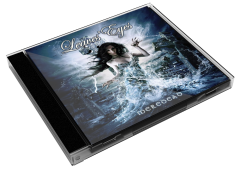 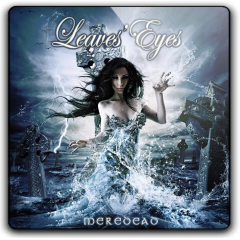 Meredead is the fourth studio album by the German/Norwegian symphonic metal band Leaves' Eyes. It was released on April 22, 2011 on Napalm Records.

The title is inspired by the Old English compound noun meredēað, literally "sea-death", which is attested (in the genitive plural meredēaða) in the passage rodor swipode meredēaða mǣst, literally: "the greatest quantity of sea-deaths scourged the skies", in Exodus, the second poem of the Junius manuscript, in the section telling the story of the Crossing of the Red Sea. Alternatively, meredēað could be translated as "sea of death" or "deadly sea" in view of a later passage in the same text: meredēað geswealh, literally "sea-death swallowed". On her website, Liv Kristine explicitly recommends Marsden 2004, and quotes the explanation for meredēað given in the book, saying that Meredead could be translated as "dead by the sea".

User Album Review
Fronted by the captivating Liv Kristine Espenaes Krull and comprised of members of the German death metal outfit Atrocity, Leaves' Eyes has steadily climbed to the top of the folk metal ladder since debuting in 2004. With traditional Scandinavian melodies as the basis for their music, Liv and husband Alex Krull delivered the Norse-themed lyrics in a compelling beauty-and-the-beast style. While not an entirely innovative concept, Leaves' Eyes far surpass their peers in songwriting ability and so were able to easily outdistance themselves from the pack. With each album, the folk influences and symphonic tendencies have increased. The trend continues on the band's fourth studio album, Meredead, for what is perhaps their most engaging and complete release to date.

Anyone at all familiar with Leaves' Eyes, or Theatre of Tragedy for that matter, knows that Liv is one of the top female singers in the world of metal today...perhaps ever. Her performance on Meredead is as strong, lilting, and mesmerizing as you'd expect. This album finds Liv exploring a more operatic style, however, at times taking the band's sound in a Nightwish sort of direction. "Étaín", for example, is a very bombastic track that also features vocal contributions from Liv's younger sister Carmen Elise Espenaes.

The shift to more symphonic stylings is slight, however, with the medieval folk melodies reigning supreme. Liv leverages her native Norwegian on some of the tracks, such as "Sigrlinn", while Old English is introduced on a couple of traditional songs. "Kråkevisa", which translates to The Crow Song, is a medieval Norwegian ballad that focuses on Liv's lilting vocals. "Nystev", another traditional Norwegian tune, features a rousing folksy beat and quite lush choral contributions.

The use of a choir is another way in which Meredead differs vocally from previous Leaves' Eyes works, but perhaps the most obvious change is the almost complete absence of Alex's voice. It's not until the highly symphonic "Sigrlinn" when the gruff, gurgling male vocals make an appearance and even then they are used sparingly. Alex returns on "Empty Horizon", but has dropped the harshness for a clean style that works quite well within the Leaves' Eyes framework. The final track, a very Blackmore's Night style duet called "Tell-Tale Eyes", is the only other instance where Alex's vocals are heard.

Meredead is very much an evolution in the Leaves' Eyes saga, with songs like the beautiful rendition of Mike Oldfield's "To France" and the highly contagious "Velvet Heart" standing out amongst an entire album of magnificent songs, and tracks like album opener "Spririts' Masquerade" evoking images of distant shores through tactful use of the fiddle and uilleann pipes. Fans of folk, Gothic, and symphonic metal will unquestionably want to get their hands on what is sure to be a top album of 2011.