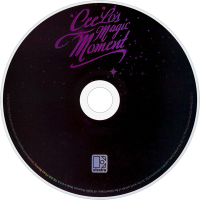 Cee Lo's Magic Moment is the first Christmas studio album and overall fourth studio album released by American recording artist Cee Lo Green on October 29, 2012 in the United Kingdom. It was released to the US on October 30 by Elektra Records. Green's versions of "Mary, Did You Know?" and "What Christmas Means to Me" peaked at numbers 22 and 23 on the December 22, 2012 R&B Songs chart in the United States.The album has sold 181,000 copies in the United States in 2012.

The album features a variety of Green's interpretations of classic Christmas and seasonal songs including collaborations with Rod Stewart, Christina Aguilera, Straight No Chaser, Trombone Shorty and The Muppets.