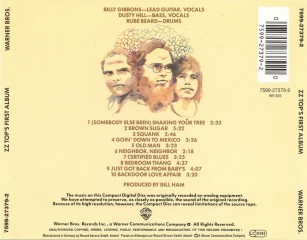 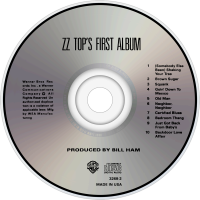 ZZ Top's First Album is the debut studio album by American blues rock band ZZ Top. It was produced by manager Bill Ham, and was released on January 16, 1971 on London Records. Establishing their attitude and humor, ZZ Top incorporated boogie, hard rock and Southern rock influences into their sound. Thematically, the album is lively, playful, and at times brash. Filled with the band's personal experiences and sexual innuendos, they became central to the group's image. Seeking inspiration from Fleetwood Mac, ZZ Top began recording the album at Robin Hood Studios in Tyler, Texas. Only one single was released from the album and failed to appear on the Billboard charts.
In 1987, this album was remixed for CD release. The full album is currently unavailable on CD in its original mix (though "Brown Sugar", "Goin' Down to Mexico" and "Just Got Back from Baby's" are available in their original mix on 2003's Chrome, Smoke & BBQ boxset, and "Backdoor Love Affair" is available on 1977's The Best of ZZ Top).