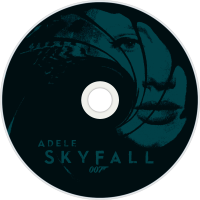 "Skyfall" is a song performed by Adele, and the eponymous theme song of the 23rd James Bond film from Eon Productions, Skyfall. The track was co-written by Adele, Joel Pott and producer Paul Epworth, and features orchestration by J. A. C. Redford. "Skyfall" was released on 5 October 2012 at 0:07 BST, as part of "Global James Bond Day", celebrating the 50th anniversary of the release of Dr. No, the first James Bond film