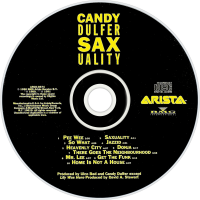 Saxuality is the debut album by Candy Dulfer. Dulfer was no stranger to music since she is the daughter of Hans Dulfer, a famous Dutch saxophone player. Prior to her debut album, Candy Dulfer performed with Rosa King at the North Sea Jazz Festival, opened for Madonna during her 1987 concert in Rotterdam, collaborated with Prince on Graffiti Bridge, joined Prince on his 1988 tour and had a #11 hit with "Lily Was Here" together with David A. Stewart.

The mainly instrumental album debuted on #4 in the Dutch album chart and was certified Gold. The album peaked at #22 in the Billboard Album Top 100, #27 in the UK Album chart and sold in excess of one million copies worldwide and was nominated for the Grammy Award for Best Contemporary Jazz Album. The album was promoted by a tour in Europe and the United States.