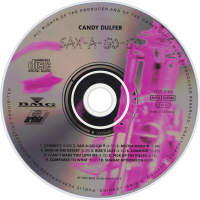 The second album by Dutch alto saxophonist Candy Dulfer, Sax-a-Go-Go entered the Billboard Top Contemporary Jazz Album chart at #5 in February 1994, remaining in the chart for 31 weeks. The album "is dedicated to the loving memory of Beppie" and includes a version of Eugene McDaniels' Vietnam War protest song "Compared to What", first recorded by Roberta Flack on her debut album First Take (1969). "I Can't Make You Love Me" was a hit for Bonnie Raitt on her album Luck of the Draw (1991).