02) What a Wonderful World

14) You Take My Breath Away 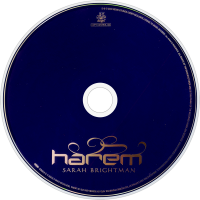 Harem is a 2003 album by English singer Sarah Brightman. It mixes her operatic voice with Middle-Eastern and Indian rhythms and vocals. Thanks to an idea of Frank Peterson, the producer of this album, in the song "Mysterious Days", they included the vocals of the late singer Ofra Haza, who worked with Peterson in 1997 on her eponymous album.