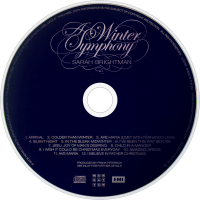 A Winter Symphony is a Christmas album from the English soprano singer Sarah Brightman, released in November 2008

The album borrows its name from Brightman's earlier 2008 album, Symphony. It is accompanied by a DVD, a special edition of the album only sold at the Barnes & Noble stores across the United States.

In the week of December 15–22, Brightman's "Silent Night" was the iTunes Free Single of the Week. The "I Believe in Father Christmas" single was accompanied by a video. Brightman also performed at the "Walt Disney World Christmas Day Parade" performing "Silent Night" on December 23, 2008, broadcasted by ABC until December 25, 2008.