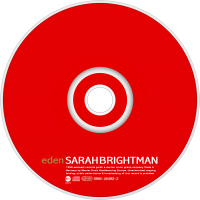 Eden is a 1998 album by English soprano Sarah Brightman. It was released under license by Nemo Studios to Angel Records.

Like Brightman's later album, La Luna, Eden juxtaposed mostly English pop songs with mostly Italian opera songs. This was a departure from her previous albums which was almost entirely in English, such as Fly. Eden retained elements of Timeless, which had strongest classical influences.

Like Timeless, Eden contains one classical rock ballad: "Dust in the Wind". This song was a huge success on Brazilian radio, because it was used on the soundtrack of the soap opera Andando nas Nuvens (Walking on the Clouds). The single "Deliver Me" also gained some mainstream American success because of its inclusion on the soundtrack of the 1999 film Brokedown Palace.