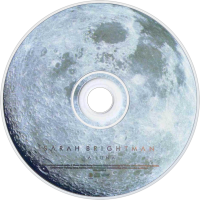 La Luna (Italian and Spanish for "the moon") is a concept album recorded by English soprano Sarah Brightman in 2000. It was released under license by Nemo Studios to Angel Records. The album combines pieces written by classical and modern composers. The classical pieces are "How Fair This Place" ("Здесь хорошо") by Rachmaninov; "Figlio Perduto", which is based on Ludwig van Beethoven's Symphony No. 7 Op. 92, 2nd movement in A minor "Allegretto"; Solo Con Te (Handel); Aria "La Luna" from Opera Rusalka. With La Luna, Brightman combined elements of her traditional operatic background with her newer style of pop music. "Hijo de la Luna" (translating to "Son of the Moon" in Spanish) is a cover originally performed by the Spanish synthpop band Mecano. Written by Ennio Morricone, "La Califfa" is the title track of the 1970 Italian film with the same name. The underlying concept of the album is the moon. It is the 17th top selling classical album of the 2000s in the US, according to Nielsen SoundScan.