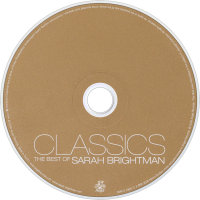 Classics is Sarah Brightman's 2001 album, between La Luna and Encore. It consists in part of previously released material, such as "Time to Say Goodbye" and "Pie Jesu", and new titles such as "Ave Maria" and "Recuerdos de la Alhambra". Entertainment Weekly, although calling Brightman a "stronger song stylist than a singer", gave the album a grade of B-. Classics was re-released in the Europe as Classics: The Best of Sarah Brightman in 2006. The European edition has the same cover art, but a different track listing.