The Songs That Got Away 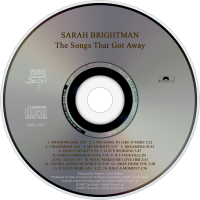 The Songs That Got Away (1989) is an album by English soprano Sarah Brightman. Based on an idea by then husband Andrew Lloyd Webber, all the songs were taken mostly from West End theatre or Broadway theatre that were either unsuccessful, never made it across to the other side of the Atlantic Ocean, were cut from its show, or forgotten by time.

All songs were produced by Andrew Lloyd Webber, except for "Dreamers" produced by its composer Marvin Hamlisch. The album's liner notes were written by Sheridan Morley.