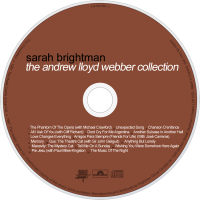 The Andrew Lloyd Webber Collection is a compilation album by classical crossover soprano Sarah Brightman. All of the tracks on this album are previously available on other albums. The album has sold 787,000 copies in the U.S

In April 2008 after Andrew Lloyd Webber appeared at the seventh season of the American program, American Idol and also by a little promotion made by the iTunes music store, the album peaked to the number-one at the store's Top 100 Vocal albums.