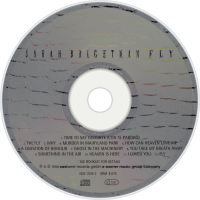 Fly is an album by English soprano Sarah Brightman. It is her second album with producer Frank Peterson and has a stronger pop and rock influence than her previous Broadway and operatic albums; it included collaborations with Andrea Bocelli, Tom Jones, Chris Thompson and Andrew Eldritch. The album produced several hits in Europe including A Question of Honour and Time to Say Goodbye and has never been officially released in the US, hence can only be purchased as an import.

In 2006 Fly was once again re-released in Japan with the original 1995 track listing along with 4 bonus tracks and new artwork.