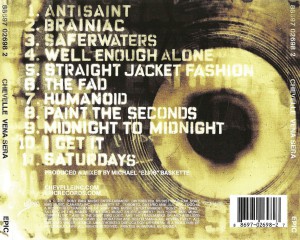 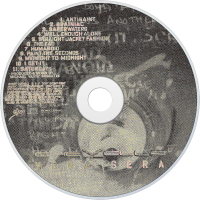 Vena Sera is the fourth studio album by Chevelle and was released on April 3, 2007, through Epic Records. Many of the tracks on this album were based on material from unreleased songs the band had previously recorded. The term "Vena Sera" is Latin for "vein liquids" AKA "Blood."

Vena Sera is the first Chevelle album with bassist Dean Bernardini, the brother-in-law of fellow members Pete and Sam Loeffler. It would also be the second and final album produced by Michael "Elvis" Baskette, marking the first time Chevelle maintained the same producer for a second record.
The first single, "Well Enough Alone", was released to radio stations on February 13, 2007.

The album debuted at number 12 in the United States with sales of approximately 62,000. This was less than their previous album, This Type of Thinking (Could Do Us In), which debuted at number eight with sales of about 90,000.
As of September 2008, the album has sold 353,740 copies in the United States.
On May 31, 2007, drummer Sam Loeffler updated the official site to say, among other things, that the song "I Get It" would be the second single from the album. The single was released to radio on June 12, 2007. In late December, it was announced by the band that "The Fad" would be the third single from Vena Sera. As of January 17, 2008, the song has been put up for adds on radio stations across the country. "Antisaint" is featured in MLB 07: The Show. "Well Enough Alone" is featured in WWE SmackDown vs. Raw 2008.