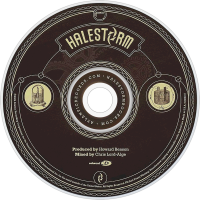 Halestorm is the debut album from the hard rock band Halestorm. Howard Benson, who has also worked with Skillet, Daughtry, My Chemical Romance, Seether, Three Days Grace and Flyleaf, produced the album. It peaked at #40 on the Billboard 200. The first single from the album, "I Get Off" has gotten considerable play time. The song reached #17 on Billboard's Rock list. The track "Innocence" was co-written by ex-Evanescence member, Ben Moody.