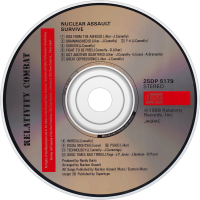 Survive is the second studio album by American thrash metal band Nuclear Assault, released in 1988 on vinyl, compact disc and cassette. As of 2012, the album has been out of print. Propelled by the single "Brainwashed", Survive was the album that broke Nuclear Assault into the thrash metal mainstream, and was their first album to enter the Billboard 200, reaching number 145 on that chart. "Good Times Bad Times" was originally recorded by Led Zeppelin in 1969.