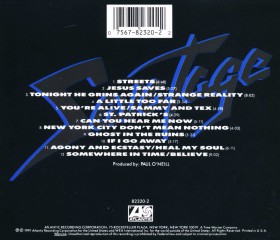 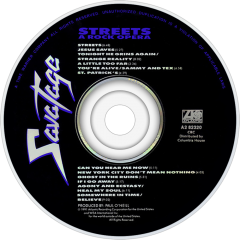 Streets: A Rock Opera (often simply shortened to Streets) is a concept album by Savatage, dealing with the rise and fall of the musician DT Jesus. It was originally released in October 1991 on Atlantic Records. The album took almost a year to record, with pre-production beginning in October 1990. It was also Jon Oliva's last album as lead vocalist until 1995's Dead Winter Dead and 1997's The Wake of Magellan, where he shared lead vocal duties with Zak Stevens (singing lead on two songs from each album). He resumed lead vocal duties exclusively on 2001's Poets and Madmen.
Savatage had thought about making a rock opera after their successful collaboration with producer Paul O'Neill in making Hall of the Mountain King. During the recording of its follow-up in 1989, guitarist Criss Oliva found a play and accompanying music written by Paul O'Neill, which the band intended to use on their album. Soon after, however, the band felt they were not ready yet, and postponed the idea for their next record. The record they were working on still received the name of the play, Gutter Ballet, and one of the tracks from the play was also recorded for Gutter Ballet, namely "When the Crowds Are Gone". The band then decided that their next album would be based on the play, and the band entered the studio to record what would become Streets.

Ghazwan says: 2 years ago
i loved this band ,they legend.