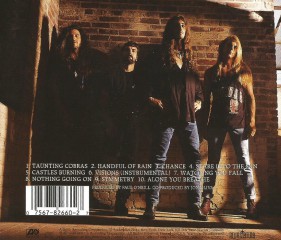 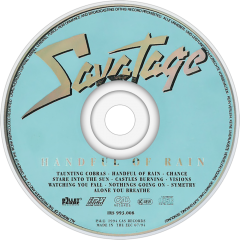 Handful of Rain is the eighth studio album by American heavy metal band Savatage, released in 1994. The first album since the death of their lead guitarist, Criss Oliva, the music is often dark in reflection of brother Jon Oliva's loss.

The title track was originally released as an abridged version, missing its second verse. Some editions of the album (for instance, the "Rock Masters" version released on the iTunes Store) include the omitted piece, referred to by the band and fans alike as "The Barmaid Verse". "Chance" is about Chiune Sugihara, a Japanese diplomat in Lithuania during World War II who defied government orders by signing exit visas for thousands of Jewish refugees. "Castles Burning" is about Giovanni Falcone, an Italian magistrate killed by the mafia in 1992. "Alone You Breathe" is a tribute to Criss which reuses the chord progression (albeit in a different key) and lyrics from the Streets song "Believe" in its long coda, and also part of the ending chorus in the Gutter Ballet song "When The Crowds Are Gone", although the lyrics do not mirror his death and the songs are not literally about him. The tour in support of this album was documented in the live release, Japan Live '94, which was released in 1995.

Handful of Rain marked the only time that Savatage had recorded together as a three-piece, their only release with then-former Testament guitarist Alex Skolnick (who had replaced Criss), and their only one without Johnny Lee Middleton (who is credited on the insert, but does not actually perform) since 1985's Power of the Night. Drummer Steve Wacholz (also credited) had already left Savatage by the time the album was recorded. Instead of replacing Middleton and Wacholz, Jon provided both drums and vocals on the album as well as lead and rhythm guitar, piano, bass, keyboards and backing vocals. The album also marks the first time Savatage would write a trademark vocal counterpoint in a song. The third section of "Chance" has at one point, five overdubbed vocals from singer Zak Stevens.[