Fight for the Rock 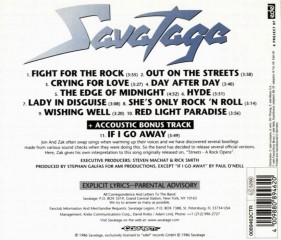 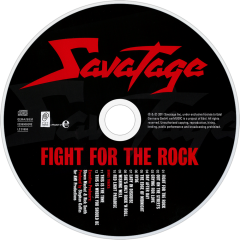 Fight for the Rock is the third full-length album by the American heavy metal band Savatage, released in 1986. It is their first album with new bass player Johnny Lee Middleton, who has since become the only ever-present member on each Savatage record released.

Released in 1986, it is largely regarded as the band's worst release by both fans and band members, with the band referring to it as "Fight for the Nightmare". Jon Oliva said in October 1994, "I've never really been fond of that album. WE'VE never been fond of that album". The band said that they were driven to make the record by their label, Atlantic Records; particularly Oliva began writing pop-rock songs for other artists on the label such as John Waite. However, the label eventually turned around and told the band to record the music that Oliva had written for other artists themselves. This destroyed the band's credibility in the eyes of the press and reviews were not kind to the band. It not only destroyed the band's image, but the negative critical reaction has been cited as a cause of Oliva's bout of drug and alcohol depression which eventually drove him from the fore of the band.

Atlantic Records also wanted the band to have photographs taken, since none of their previous releases had included any. The band hired a friend to do the photography work, with one of the photos featuring the band re-recreating the famous photo Raising the Flag on Iwo Jima. The band agreed this was a good idea at the time, but look back with the same feelings on the photos taken as they do the album.

When initially released, the album featured a Parental Advisory label on the front cover, despite having no "nasty words", as Jon Oliva puts it, featured anywhere on the record. This was largely done to please the label, as they felt that putting the sticker on the record would drive up record sales. Although it did chart, the band have been extremely reluctant to perform any of the songs live, and haven't done so since the early 1990s. Even on the tour in support of the album, the band only performed "Hyde", "The Edge of Midnight" and few others.