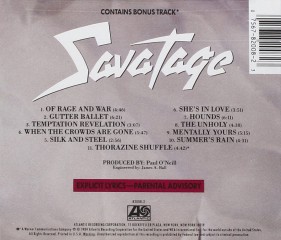 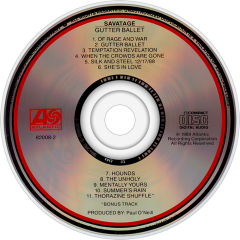 Gutter Ballet is the fifth full-length album produced by the American progressive metal band Savatage. This was the second album created under the direction of producer Paul O'Neill and was initially released in 1989.
This album was a true turning point for the band, for after Jon Oliva watched Andrew Lloyd Webber's musical The Phantom of the Opera in Toronto, he decided to change the sound of the band, from a heavy metal to a more progressive sound, which is reflected in songs such as "When the Crowds Are Gone" and "Gutter Ballet". Gutter Ballet is not a concept album, but the final three songs ("Mentally Yours", "Summer's Rain", "Thorazine Shuffle") are a conceptual suite dealing with a single character as revealed by the band in interviews.